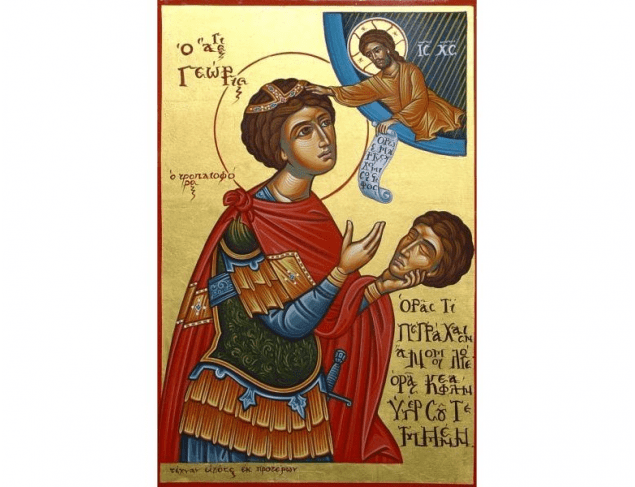 The Holy Orthodox Order of Saint George the Great Martyr is an international, confraternal, religious, lay, pan-Orthodox order of Christian chivalry formally blessed in 2019 with the ecclesiastical blessing of His Eminence Metropolitan Hilarion, First Hierarch of the Russian Orthodox Church Outside Russia.

As an Orthodox order of knighthood, the Order is open to any Orthodox Christian (both male and female, cleric or lay) who is in good and moral standing with the Church.

The Order is additionally open to non-Orthodox, Trinitarian Christians who profess the Nicene-Constantinopolitan Creed of 381 AD and who support the works and charitable activities of the Order of Saint George the Great Martyr. Non-Orthodox Christians form a distinct class and become non-voting companion members.

The Order is a self-governing, independent body, having its own governing institution. As the Order’s activities are international, so too is its membership. The seat of the Order is in the township of Saint James, New York on Long Island at the Monastery of Saint Dionysios the Areopagite.

WHAT DOES THE ORDER DO?

The Order has as its goals and objectives to organize, promote, aid and engage in charitable, humanitarian, educational, medical and chivalric activities, particularly by: (a) aiding the poor, the sick, the dying, the needy, the aged, the infirm, the maimed, the mentally ill, the imprisoned, and the socially disadvantaged; (b) assisting in the maintenance of holy places including, but not limited to, buildings, monasteries, seminaries, shrines, churches, and cathedrals of the Orthodox Faith; and (c) establishing and promoting the works of hospitals, medical centers, orphanages, schools, and other bona fide Orthodox institutions and/or organizations.

To this end, the Order dedicates itself to an annual philanthropic project, which for 2022 is dedicated towards raising monetary assistance for the support of the native Arab Orthodox Christian population in the Hashemite Kingdom of Jordan. Specifically, the Order will be supporting various Orthodox charities and social projects run by the Greek Orthodox Archdiocese of Amman.

WHAT ARE THE BENEFITS  OF MEMBERSHIP?

The benefits of membership in the Order are that it offers members outward ways to be of true Christly service, as mirrored in the Beatitudes and in the basic Christian message of love. We are all called to serve, protect, and defend those who are the least among us.

As a member of the Order, you can make a positive impact on the life of an Orthodox Christian near and far. Membership enables you to be an active participant in our ever-growing, charitable outreach in support of those of our faith both locally and internationally in need.

The Orthodox faith is worth defending! As a member you are called to defend the faith of the Holy Apostles and the truth of Christ. Your voice is not singular but joined together with many others, as we never act alone but as one body. Joining the Order puts you into contact with a loyal band of Orthodox brothers and sisters who share the same call of service and walk together on our journey towards guarding that which is true and just.

According to our Christian faith, charity, compassion, and love are held to be the ultimate expression of the human spirit which helps to bring us closer to theosis. This is so central to our faith that it plays a key role in our own personal salvation. As in Matthew Chapter 25 verses 31-46, Christ says:

“When the Son of Man comes in His glory, and all the holy angels with Him, then He will sit on the throne of His Glory. All the nations will be gathered before Him, and He will separate them one from another, as a shepherd divides his sheep from the goats. And He will set the sheep on His right hand, but the goats on the left. Then the King will say to those on His right hand, ‘Come, you blessed of My Father, inherit the kingdom prepared for you from the foundation of the world: for I was hungry and you gave Me food; I was thirsty and you gave Me drink; I was a stranger and you took Me in; I was naked and you clothed Me; I was sick and you visited Me; I was in prison and you came to me.’ Then the righteous will answer Him, saying, ‘Lord, when did we see You hungry and feed You, or thirsty and give You drink? When did we see You a stranger and take You in, or naked and clothe You? Or when did we see You sick, or in prison, and come to You? And the King will answer and say to them, ‘Assuredly, I say to you, inasmuch as you did it to one of the least of these My brethren, you did it to Me.’

Then they also will answer Him, saying, ‘Lord, when did we see You hungry or thirsty or a stranger or naked or sick or in prison, and did not minister to You? Then He will answer them, saying, ‘Assuredly, I say to you, inasmuch as you did not do it to one of the least of these, you did not do it to Me. And these will go away into everlasting punishment, but the righteous into everlasting life.”

WHAT ARE THE RESPONSIBILITIES AND COMMITMENT  OF MEMBERS?

At a local level, individual members of the Order are expected to do their best to be of service and assistance to all local canonical Orthodox missions, parishes, and monasteries in the region in which they live regardless of jurisdiction. Assistance by members can be financial, material, or donated time. Each member is additionally expected to promote the goals and objectives of the Order and to actively and purposely encourage other  Christians to join in membership. It is expected that clergy and lay members participate in all charitable fundraising activities of the Grand Magistry of the Order, their Grand Priory, and of their local Commandery.

WHAT ARE THE SPIRITUAL ELEMENTS OF THE ORDER?

Holiness is the virtue to which all Christians are called to strive. It is the seat of all that is good and just. In working out our call to holiness, not all persons are called to be priests, monks, or nuns. The Order of Saint George the Great Martyr offers knighthood as a formal, committed way of service in the Orthodox Church. Each member of the Order is to live their lives in holiness, in accordance with the Gospel of Christ and the precepts and teachings of His holy Church. It is through charitable works, the deepening of prayer, and an active sacramental life that holiness, mercy, and humbleness can be achieved in a member.

The works of the Order do not in themselves give moral or spiritual merit. However, it is the spiritual bond of the Order with the Orthodox Church that inspires and makes fruitful our works. It is important to remember that the Order is not for all, it is not for the weak of heart nor is it for those who seek only vanity. The Order asks that we put aside our ego and personal interests and instead serve the glory of Christ, the glory of His Church, and the glory of His Gospel. This Order belongs not to us, but rather to Christ as it is His alone under His primordial ascendancy as King of Kings and Lord of Heaven and Earth.

Your commitment of “time, talent, and treasure” is respectfully requested. It is our deepest hope that you will see a place for yourself as an Officer, Knight, or Dame of this Order, and, with us, reach out in the name of our Lord to Orthodox Christians in need or under persecution. We are called to be a voice for the voiceless!